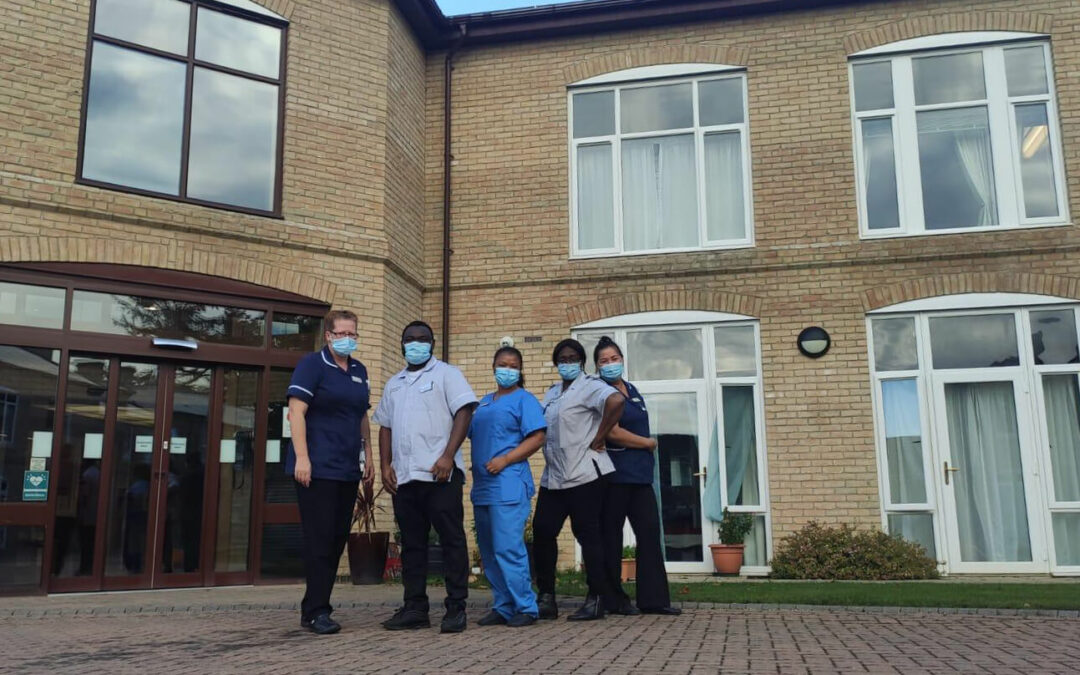 Three student nurses who joined us on a five-week placement are eager to return after we opened their eyes to the diversity of services on offer and the scope for career progression within care.

We would like to congratulate Christopher Obhiero-Thomas, Clara Etoruom-Echebima and Rhita Moroyiwa on recently completing their placements with us.

Having been offered a choice, the second-year mental health students at Anglia Ruskin University were originally sceptical about the benefits of opting for a care home placement, having failed to appreciate the broad scale of the care community’s offering.

Despite their initial reservations, the students’ understanding of the sector was soon completely transformed. Priscilla Masvipurwa, our Head of Rehab and Nursing Services, explained: “People often have a preconception of social care, which is at odds with the reality. Christopher, Clara and Rhita were no different in that regard. They believed that working in care offered limited career progression and was effectively a ‘dead end’ when compared against other aspects of healthcare; a huge misconception.”

She continued: “By the end of their placement though, their view had changed completely. It started with the initial tour where we walked them around to gain an understanding of the diversity of our services – and it’s no overstatement to say they were in awe of the scale of the integrated care we offer. They were also surprised by the amount of staff who had further education – something that just served to underline the opportunities available within care.”

The students spent time with all of our teams, including the physiotherapists, occupational therapists, nurses, doctors, and psychologists, who provided them with access to each of our specialist services, such as the newly introduced rehabilitative robotics equipment.

Alongside teaching them how to care, staff gave the students time to talk, grow and develop. The difference between a care environment and a hospital setting, is that a hospital provides no time to sit and talk with a patient. At Askham though, the students were able to offer holistic, hands-on care, which enabled them to witness and appreciate a care recipient’s full journey.

Priscilla elaborated: “They were able to practise all areas of nursing. They understood how competent and confident a nurse has to be at all times in a care home. Your patients depend on you and you are the one calling all the shots in a timely manner. It isn’t a place where you go to retire; you cannot take it easy here. They realised how much autonomy you have as a nurse in a care home – you have to know everything about anything, and have good sense and intuition.”

She added: “One of the students actually burst into tears on placement as she had never experienced such intense care from an entire team. We involved them in every discipline which they would have struggled to achieve elsewhere. In some settings, a student is seen as an inconvenience – but that couldn’t be further from the case at Askham. We recognise their value as the next generation of care providers. We see ourselves as a campus of excellence and that’s reflected in how we treat our staff, with students very much a part of that.”

Feedback from the students saw them rate their placement with us as amongst the best, having already been on several placements beforehand. All three expressed a desire to come back to the community and learn more in future, and we look forward to welcoming them back.

To get in touch and find out more about Askham or to enquire about a potential career, please email info@askhamvillagecommunity.com.